So, our kitchen has been quite the time (and money) consuming task as of late. If your recall, this is what it looked like when we bought the house (please excuse the working mess) : 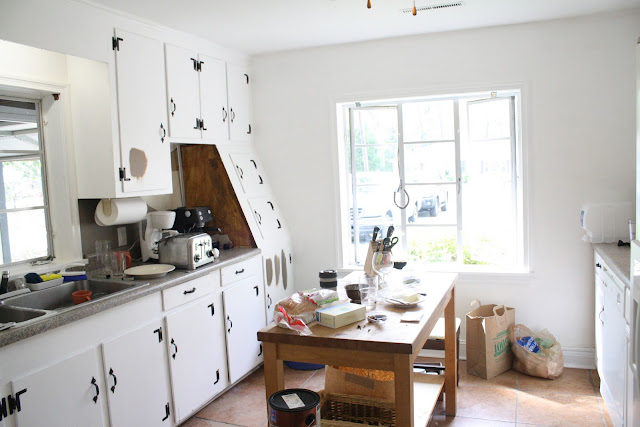 It's very much the reason I fell in love with the house. It had the good bones...a terra cotta tile floor...huge windows that crank open...and space for our heirloom butcher block. And that's all that really mattered in my book. The rest I could work with. And that, my friends, is what we've been doing.

I actually really love the dated cabinetry (gasp...I know...a huge faux pas in today's design book). But here's the thing: they're custom; they extend all the way to the ceiling and are finished with crown molding; they're simple and plain; and someone painstakingly created them by hand, just for that kitchen, 50 years ago. I cherish those stories, and the time and effort that person put into their design. What I didn't cherish was their ultra-white paint job and that glaring black hardware. So Maple and I painted them this color by Sherwin Williams (who's always having major paint sales, by the way): 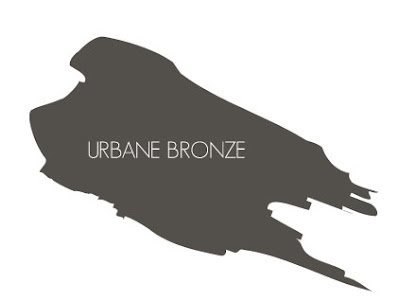 Yes, maybe it's a bit daring. But that's me...and my design style--always looking to break the norm. Life's too short to be boring, in my book at least. It's really the perfect concoction of gray and brown--just what I was seeking. It's warm, and inspiring, and disguises the imperfections and stains that are pretty much inevitable in our no-holds-barred cooking environment. Best of all? It melds perfectly with the tones of the countertop (which we so badly want to replace but must keep for a bit) and the orange tones in the terra cotta flooring.
Here's a glimpse of the result, but please be forgiving. She's far from being done: 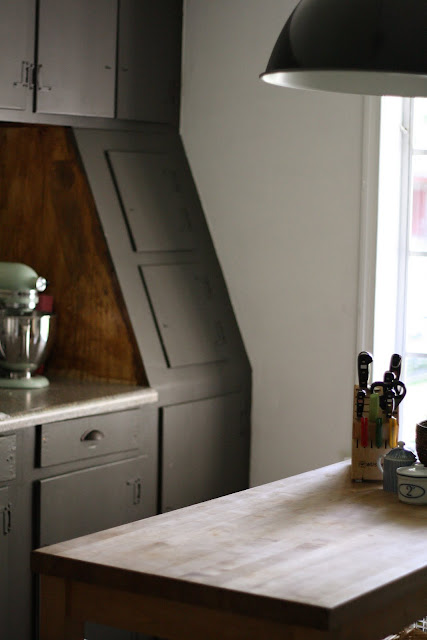 See the exposed wood on the side of the slanted pantry?
It, of course, was slathered in laminate and will soon be sanded and painted. 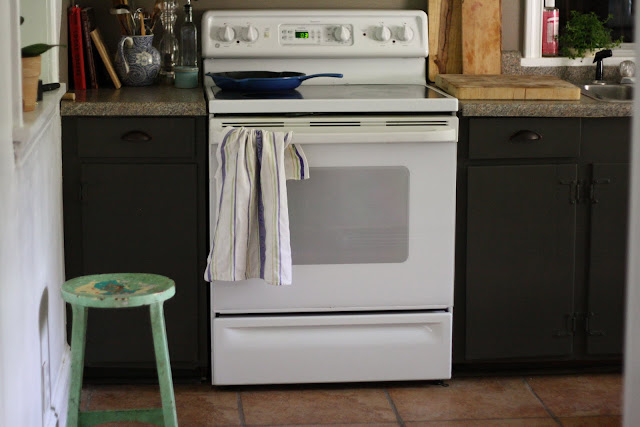 The new cabinet color doesn't perfectly suit the outdated stove. Instead it makes it pop. But that's ok for the time being.Just imagine in it's place a stainless, slide-in gas range.
Someday...hopefully relatively soon.
Lots of sweat still to be shed, but she's getting there at least. See that miserable gray backsplash? It's vinyl paper. Sweet--or not at all. We're still taking that down, but of course it's not as simple as peeling it's misery away. There's laminate underneath, which extends behind the counters, so that's a chore in itself. Soon, though, that will all be painted white. And someday, when the budget allows, it will be marble, or something of the likes. Not only do the walls need work, but so do the facades of the cabinet. We've chosen the hardware, we simply need to find the time to install them all. The walls will get coated with a warmer shade of white that works with the existing tones, and the windows will be outfitted with simple roman shades that are in keeping with the plain cabinetry. I really wanted to work with the vintage charm of the kitchen instead of glossing it over and trying to pretend it's brand new. That's simply not my style.
Last, but quite far from being least--the dishwasher went out a few days ago. It's probably 10 years old, and a base model GE. Instead of replacing the pump and still loathing it's appearance and terrible washing and drying perfomance, we decided to replace it. Lowe's had this sleek, plain-front Whirlpool super duper on sale, and I scored a $600 dishwasher with three sprayers and an adjustable top rack for just over $400.
And, while I was perusing the back-aisle of major deals....guess what else I spied: 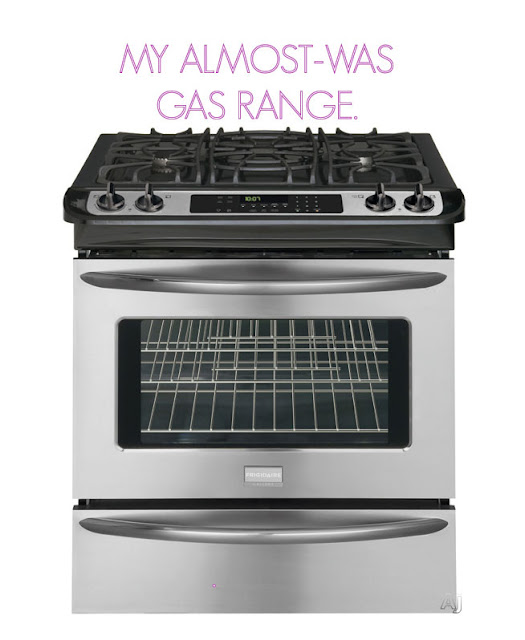 This beauty, which a customer had special ordered and decided to return. There was absolutely nothing wrong with it, except that it didn't suit that person's taste as well as they'd hoped. What was originally a $1400, 4-burner, slide-in gas range was marked down to $1053. And, in conversing with the sales guy, I talked him into marking it down 15% from that already-slashed price. I was ready. Maple was on board. We were going to take the plunge. After all, we'd allocated some funds to replace the miserable glass top we're currently stuck with. And then I felt selfish, because Maple wants a boat (although he does very much want a gas range, too). And we want to build our patio. And plant a few trees. And build an outdoor oven and grill. And buy window treatments. And my word, that checklist goes on and on. So I left her behind...which is so hard for me to do when I know she was pretty much the best deal of the century. But, I don't need her to be happy, and that's pretty much that.
Anyway, I thought it was time to give you a glimpse at the little bit of progress we've made in the house. It was hard for me to do; for some reason I'm entirely too reluctant to let people in on the imperfect state of our house. But it was time to get real...so I hope you've enjoyed :)
Labels: appliances, cabinetry, interior design, our house, paint colors, the kitchen

i know ALL about the adventures of find the PERFECT appliances - i got my PERFECT stove on sale too - it was just perfect timeing -- i gutted my kitchen - but sorta' now wish i painted the cabinets and saved the BOAT load of $$$$ i put into it .. oh well .. let's just say what i bought my house for years back, all the money i put into it so far - i'll never get back in this market *boo*

OMG. It's looking fabulous. You have been VERY busy lady! I can't wait to see the finishing touches, not to mention the rest of the house. Post on FB all the before and afters if you aren't going to post them all on here :) cuz I wanna see!!!

I just discovered your lovely blog. I'm just new into blogging this year & have just finished off my own blog on fashion, food, travel & interior design.
http://scrapbook-melissah.blogspot.com/
I had a lot of fun putting it together maybe you would like to check it out if you have a spare minute.
x
Melissah

thanks for the sweet, sweet compliments, friends! it really means a lot :)

Erika--you should send pics of your kitchen! i so want to see!